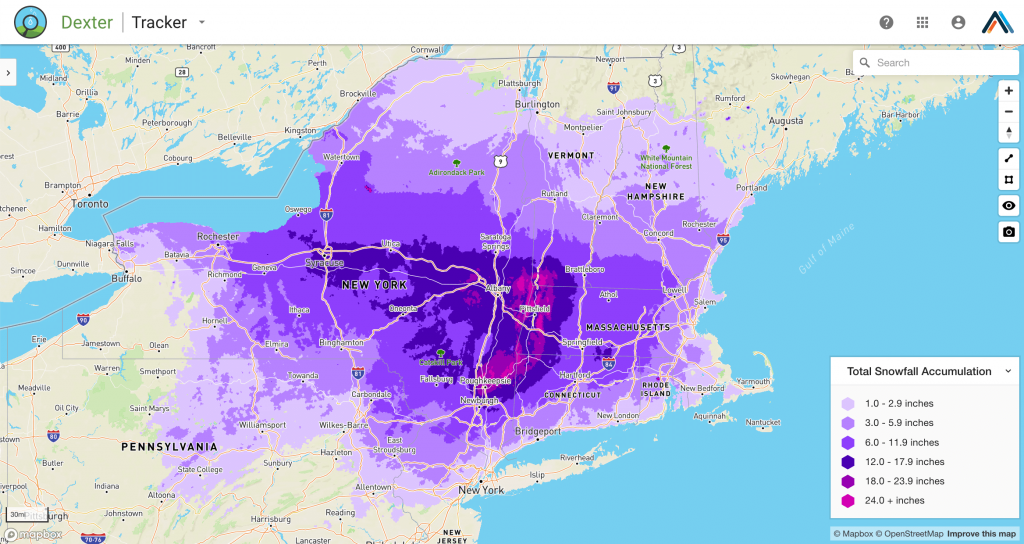 Hopes for a white holiday were answered a bit earlier than normal this year with a days-long blast of winter weather in the Northeast. While many insurers may still be concerned with autumn property hazards – like clearing gutters to avoid ice dams – carriers across New England have fast-forwarded straight to winter.

When severe weather strikes, Dexter from Athenium Analytics offers insurers a timely and detailed overview of storm impacts across your book of business. And, as the claims start to blow in, Dexter’s weather forensics data helps claims adjusters verify hyperlocal storm impacts, including snow and ice totals, wind speeds and storm swaths.

Let’s take a look at the climatic events that led to this early December snowstorm:

Last week, a large mid-latitude cyclone developed in the upper Midwest, unleashing huge amounts of snow; locations in South Dakota, Minnesota, Wisconsin and Michigan reported well over a foot. On Sunday evening, Dec. 1, the low-pressure system exited the Upper Midwest through the Ohio Valley in route toward the East Coast’s metro areas.

Within hours, our Dexter weather forensics solution reported that this first wave of snowfall dumped nearly 2′ across upstate New York into southern New Hampshire; Albany, in particular, received 22.6” of snow. The intensity of the snow bands and the storm’s unusually long duration (24-30 hours) led to the Albany region’s largest single storm snowfall total since the Superstorm of 1993 and its eighth-largest snowstorm on the record going back to 1884.

By Monday evening, the system moved offshore – but the snowfall wasn’t over yet. A second low pressure system developed just to southwest of the first system, allowing the snow to linger over eastern Massachusetts, southeastern New Hampshire and most of Maine. When the totals are tabulated, we expect locations across northern Massachusetts and southern New Hampshire to surpass over 2′ of snow.

By analyzing multi-dimensional weather data, Dexter gives insurers hyperlocal (0.3 square mile) resolution to verify exposures and delivers the most comprehensive peril verification software on the market today. For our customers, this means the most accurate snowfall totals to help your adjusters verify claims quickly and efficiently.

To learn how to add the Dexter weather forensics solution, contact our sales experts today.