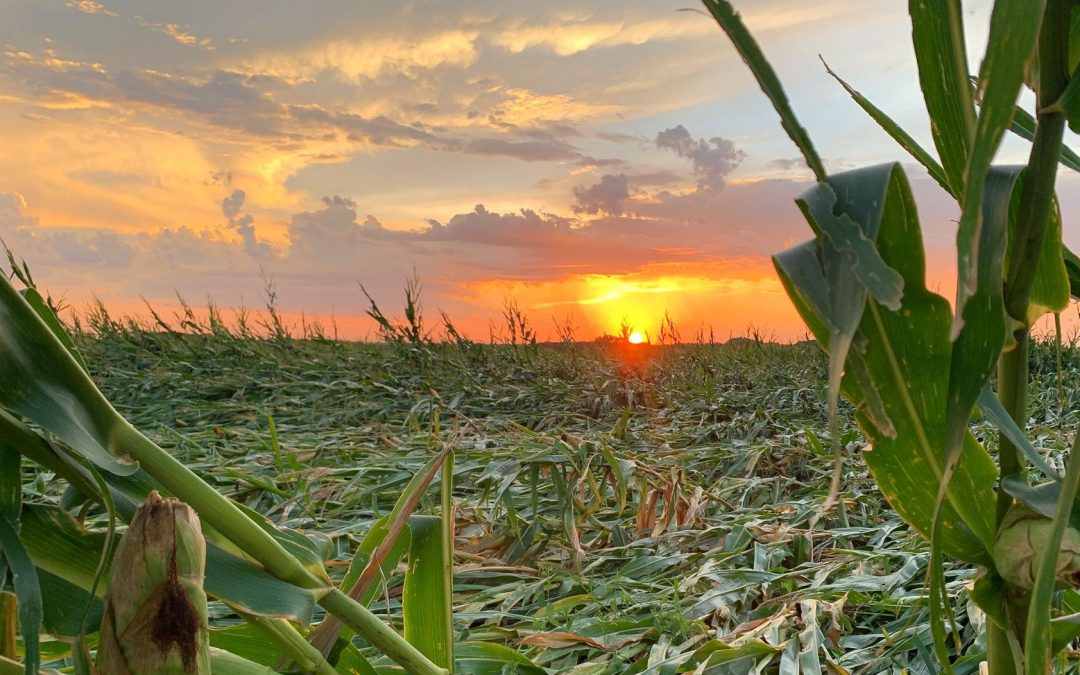 On January 8, NOAA released the final 2020 totals from its Billion-Dollar Weather & Climate Disasters project, which tracks the cost and frequency of severe weather events across the U.S. The data shows that 2020 set a new record with 22 weather events each causing over $1B in losses (compared to 14 events in 2019). These 22 events caused an estimated $95B in total losses, making it the fourth costliest year for natural hazards since 1980.

The 22 catastrophic weather events last year not only outpaced the five-year average (16.2 events), but also significantly exceeded the 41-year average of seven events, which is CPI-adjusted to account for inflation. According to NOAA, last year’s costliest events included: 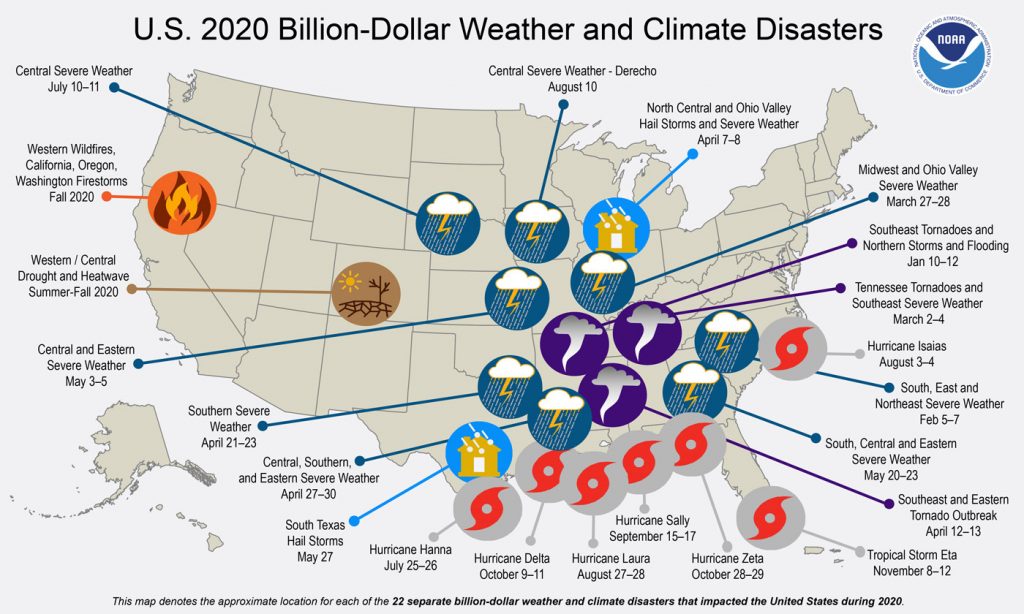 A record year for hurricanes

2020 was noteworthy for being the most active Atlantic hurricane season on record – there were 30 named storms, 12 of which made landfall in the continental U.S. According to Munich Re, last year’s tropical cyclones accounted for more than $40B in losses, of which $26B was insured.

However, despite the record-setting hurricane season, insured losses from severe convective storms (including tornadoes and hailstorms) were even more costly for insurers. The latest NOAA data cites 13 separate billion-dollar SCS events in 2020, which yielded just shy of $34B in losses. This number is slightly lower than the estimate from Munich Re – the reinsurance giant cited $40B in SCS losses in the U.S. last year, of which $30B was insured. That means major SCS events like the Midwest derecho and Nashville tornado had a bigger impact on insurer’s bottom lines than the unprecedented hurricane season. Still, the growing threat of severe convective storms remains under the radar for many carriers. 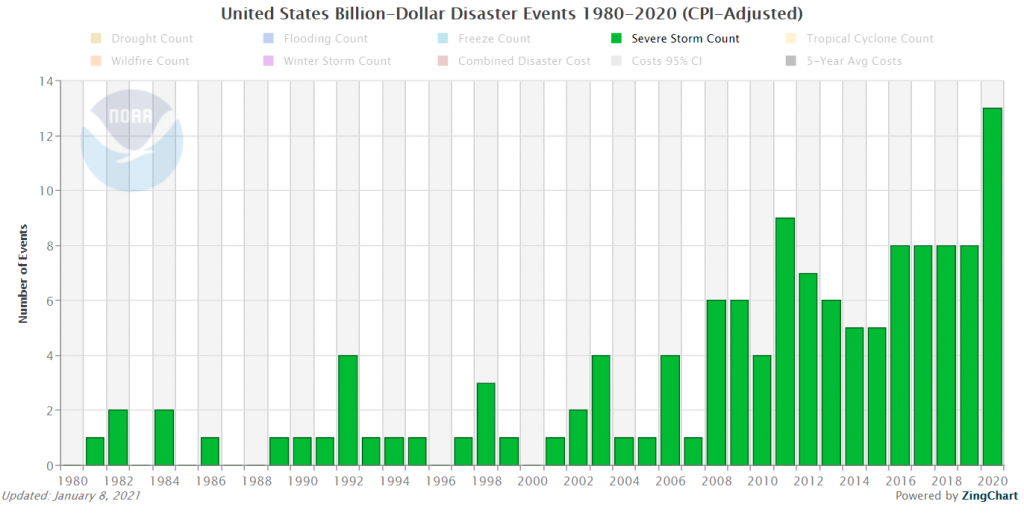 Annual billion-dollar SCS events in the U.S. Courtesy of NOAA.

On August 10, 2020, the Midwest experienced a catastrophic “derecho” event that brought severe thunderstorms, hail and straight-line winds to large swaths of Iowa, Illinois, Ohio, Minnesota and Indiana. The widespread hail and winds up to 140 mph damaged millions of acres of crops, caused significant property damage and cut power to more than 500,000 Iowa residents.

In total, the Midwest derecho caused more than $11B in losses, according to NOAA. That makes it the third costliest weather event of 2020, just behind Hurricane Laura ($19B) and the Western wildfires ($16.5B). The recent rise of catastrophic SCS events (and their corresponding insured losses) suggest that insurance carriers need a better way to both forecast and address major losses due to hail, tornadoes and severe winds.

According to Aon, severe convective storms are currently the nation’s second most expensive peril. Since 1990, SCS events have caused $330B in insured losses, compared to $362B from tropical cyclones during that same period. 2020 marks the thirteenth straight year where SCS losses topped at least $10B in the U.S. And after another record year, the total insured losses from convective storms now trail hurricane losses by less than 10%.

The numbers suggest convective storms could soon overtake tropical cyclones as the most expensive peril for U.S. insurance carriers. What can insurers do to better manage convective storm losses moving forward? The answer could lie in collecting better hazard, risk and property data to build more sophisticated forecasting and pricing models. In fact, work is now underway to do just that.

Both organizations have a strong history of delivering market-leading solutions to the world’s top insurance carriers and this new project will provide innovative new tools to help insurers predict, prevent and prepare the growing threat of severe convective storms. The main goal of the project is to fill historical gaps in SCS data and improve the models that insurance carriers rely on for policy pricing and reinsurance. As noted in the press release, the deliverables include:

“Past studies of severe convective weather have been surprisingly one-dimensional. Hail, tornadoes, and severe convective wind occur along multiple axes (east/west) with various directions of travel that cannot be assumed from the point source reports that have been historically used for loss analysis. Through this collaboration with Aon, we’ve been able to extend our clients’ understanding of historical SCS occurrence into two dimensions for all perils—hail, tornado, and wind—while also extending a third dimension of intensity for six different intensity levels for each individual peril.

“This historical dataset uses several proprietary methods invented by Athenium Analytics meteorologists to give the most accurate depiction of past hail, wind and tornado events possible, ingesting terabytes of atmospheric reanalysis data, radar data, and tornado storm surveys to get as close to reality as possible.”

While hurricanes remain top-of-mind for insurers writing business along the Atlantic and Gulf coasts, severe convective storms continue to be an under-noticed, but dangerous threat across many parts of the country. As the frequency (and cost) of these billion-dollar SCS events continue to rise, insurance carriers need newer tools—built on better data—in order to address these threats and protect their bottom lines. The new collaboration between Aon and Athenium Analytics offers a significant, leading-edge solution designed to address this growing issue for carriers. Insurers will now have an opportunity to equip their teams with the knowledge and foresight needed to prepare for the next catastrophic derecho or tornado. Stay tuned for additional details as the project develops. 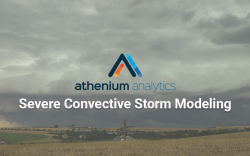 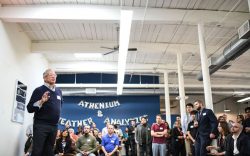 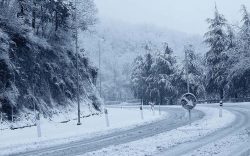 Deep freeze: the impact of winter storms on insurance carriers